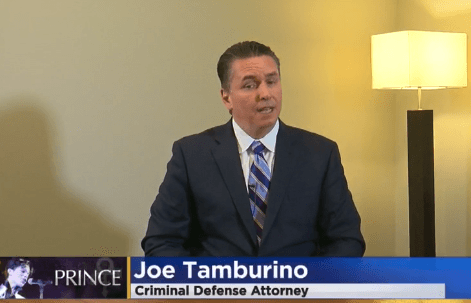 Caplan & Tamburino Law Firm, P.A. Partner Joe Tamburino recently appeared on WCCO 4 News to discuss recent developments in the investigation of the death of singer and Minnesota native Prince. Prince, who passed away in April of 2016 at his private estate Paisley Park, died as a result of an accidental fentanyl overdose. Fentanyl is a powerful opioid pain medication that’s roughly 75 times stronger than morphine.

While it has been nearly two years since the star’s passing, investigators have still yet to determine how Prince obtained the Fentanyl, which they believe came from China. Prince’s family has also initiated efforts to seek more information about his death – largely in hopes of holding the person who provided the opioid medication accountable.

Prince’s death and subsequent investigation are now raising questions about whether or not someone will face criminal charges for supplying the singer with the opioid medication that led to his death. Several search warrants in the case have cast the spotlight on Prince’s head of security – who discovered Prince after he died in an elevator at Paisley Park and whose name was on two bottles of opioids (though not fentanyl) at the singers home. Investigators have also looked into a physician who prescribed an opioid to Prince under his security guard’s name, and a celebrity addiction physician and his son, who had prescription overdose medication with him when Prince was found dead.

Upon request from WCCO, Partner Joe Tamburino – who is not connected with the case – reviewed documents from the investigation to provide his opinion on the potential for criminal charges. As Mr. Tamburino states, the parties mentioned above could potentially face criminal charges in regard to their actions. However, those charges would be minor, low level offenses because the medications they were involved with were not the fatal fentanyl that caused Prince’s death.

As the investigation continues, any suspect who can be connected with the fentanyl in question could potentially face greater risks of criminal charges. In similar cases involving fatal overdoses, Minnesota juries have convicted individuals who provided or injected individuals who later died with opioids. Criminal charges may also be possible if a physician were to have provided Prince with the fentanyl. In a similar case involving the death of singer Michael Jackson, his personal doctor was convicted of involuntary manslaughter for administering a lethal dose of propofol.

Our legal team at Caplan & Tamburino Law Firm, P.A. is thankful for the trust and confidence local news agencies like WCCO place in our team to provide our insight into matters involving criminal law and other legal issues. It is the same trust our clients have placed in our attorneys when they face serious criminal charges and penalties, including those involving drug crimes and offenses such as manslaughter. If you have questions about a potential case and wish to discuss your defense, contact us for a free and confidential consultation.